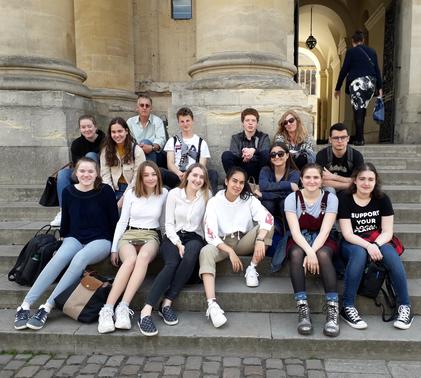 Lower Sixth IB students went on a trip to Oxford as part of their Theory of Knowledge (ToK) course. ToK is one of the three core elements of the IB diploma and focuses on tackling knowledge issues and asking questions about the world around us.

We started our knowledge journey visiting the eccentric Pitt Rivers museum: here the history of anthropology is visible amongst the many objects of different peoples and cultures. From objects against the evil eye to shrunken heads, students reflected on questions such as “can culture be examined scientifically? What ethical issues arise from collecting and showing these objects in a museum?”

In the second part of our journey, we went to the “Schools” quad at the Bodleian library: here students questioned the older hierarchy of subjects, still visible from the Latin inscriptions on each door. What is the link between astronomy and rhetoric? Why were languages, such as Hebrew and Greek, taught in the same department of geometry and arithmetic? We then went on a tour inside the old library where we admired manuscripts that date back to four hundred years ago. Knowledge was literally kept on lock as each volume was chained to the shelves and students could only read them inside the library. Yes, this is where Harry Potter’s films took the idea from, but they made a mistake. Books had their chains attached at the front and not at the back as they would have been damaged more easily, therefore they had to be displayed on the shelves on the side of the pages. This made it difficult to recognise them, but they solved the problem by writing a number on them.

Special thanks go to Graham Hartley that managed to stay calm and patient and drove us safely despite troubles to find a parking space and road accidents on our way back, and to Pippa Bell who spotted a very interesting temporary exhibition showing ancient manuscripts on the story of the development of three-dimensional communication over the last 500 years.