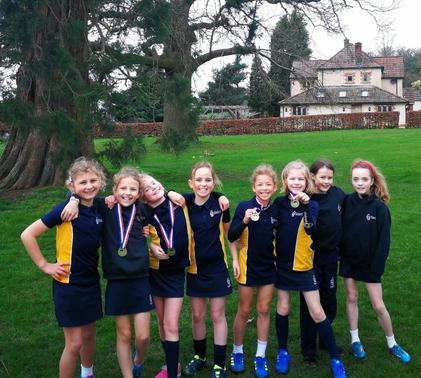 The long awaited Tockington Manor Cross Country Relay event recently took place and it was a nice return after its cancellation due to snow last year!

We arrived with ten teams across all three age groups, all keen, slightly nervous and a little excited about the prospect of running a challenging Cross Country event.

The event started with the U9 (J3 and J4) Girls and Boys races.

The two teams were:

This race might have been the highlight of the day with Eva Crowe running a world class second leg to put the team in front, and allowing them to maintain the lead to win GOLD! All of the runners did really well and many were experiencing Cross Country for the first time ready for next year!

You may notice that the second U9 boys team went with a runner short and the organisers allowed one runner to complete two legs. Reagan stepped up and ran the first and last leg and did it in real style. A real warrior performance.

Wonderful gritty performances from all of these girls with the Ester bringing her team in fifth place.

This was a really tough race with the pace being run near record breaking time. The boys stuck with it and all put in a shift for Max to run in a very respectable eighth place.

It was great to have Wolfe step in on the day due to a runner being unwell and all of the boys and the girls, whose race was run at the same time, worked well, encouraging each other. The team spirit here for the final race was palpable and we willed the Sidcot teams on in the face of very experienced Cross Country Athletes. Coming in respectably sixth and seventh places. Note that boys' race was so quick it was a new course record and the boys were not far behind.

A massive well done to all and a big thank you to Sue Taylor who came out of retirement to help drive a bus and manage the teams. A big thank you to all the parents who made it up to Tockington to support us. Thank you so much.