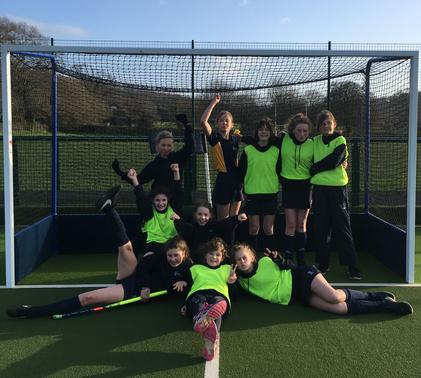 A brilliant game of Hockey with an intense pace set from the girls straight from the get go, this game was approached with immense confidence and determination which is super to see! Sidcot dominated the play maintaining possession 75% of the time, excellent ball positioning and accurate, strong passes allowed the girls to fully utilise the space they created on the pitch and score four cracking goals to secure the win. Once again, we are highly impressed with the girls sporting attitudes and abilities. Keep up the great work ladies!

Sidcot started slowly, with Clevedon scoring in the first couple of minutes. Sidcot then managed to compete well for the ball, with some excellent individual performances and some really good attempts at goal. Unfortunately Sidcot could not score, Clevedon also had numerous attempts but Darcy played brilliantly in goal and stopped everything with some tremendous saves. Clevedon showed great team work and it gave them the upper hand, they then managed to score two more goals. Really well done to player of the match Darcy!

A really positive start resulted in an early goal and Sidcot dominating – but a lapse in concentration allowed a Clevedon equaliser and, almost, for Sidcot to snatch defeat from the jaws of victory! Fortunately, however, there was a late rally and a re-group and Phoebe Wring slotted home the winner just prior to the final whistle.

Good work in the end!

Player of the match: Charlotte Harrison