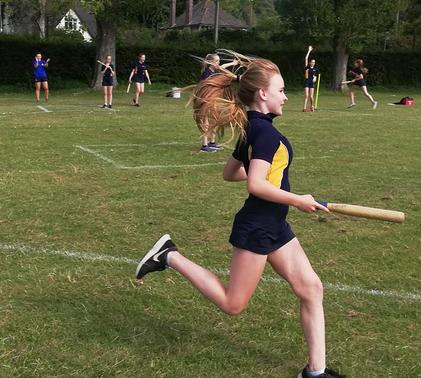 Another great set of results against Priory School this week. There was some fantastic batting on all pitches against a very strong Priory fielding side.

Third Form: Sidcot 9.5 - 6.5 Priory. Well done to player of the match Beth Townsend and Phoebe Wring. Today the Third Form played fantastically well, having practiced the placement of their batting earlier in the day, as a result they were able to score some brilliant rounders. The first innings was completed with Sidcot getting all nine players out before the end of the innings, what a magnificent match!

Lower Forth: Sidcot 10.5 - 5 Priory. Well done to player of the match Honey Hann and Charlotte Harrison. Another competitive and competent performance from the Lower Forth girls. They did however put themselves under pressure by not batting to potential in the first innings. However, there was some superb fielding and a massively improved batting performance in the second innings and this led them to a well deserved victory.

Upper Forth: Sidcot 6.5 - 9.5 Priory. Well done to player of the match Vicki Lawrence and Izzie Hoddell. Another steady performance from the Upper Forth girls, with some accurate batting. Fielding is improving but there is still some room for development. A very good game!

Lower Fifth: Sidcot 9 - 10 Priory. Well done to player of the match Molly Whitcombe. The Lower Fifth match was unbelievably close, having drawn the first innings it all came down to the second. There was some absolutely wonderful batting and some really good rounders scored as a result. Fielding was also tight but unfortunately Sidcot ended up beaten by one rounder. Such a close match but very well played by everyone!