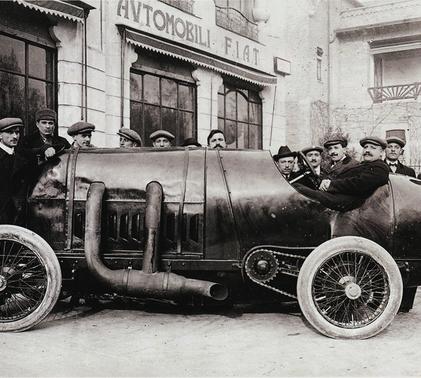 Apart from racing a variety of old and modern cars and motorcycles for more than 30 years, Sidcot Governor Duncan Pittaway has spent the last ten years restoring a car that, in 1911, was the fastest thing on the planet!

There’s an event at Goodwood in a couple of weeks time called the Festival of Speed, and Duncan has been invited to bring his Fiat S76 along for its post restoration debut,... 100 years since it was last run.

It may have been the fastest car in the world back in 1911 ‘unofficially’, but this amazing Fiat S76 certainly hasn’t undergone the world’s fastest restoration! Owner Duncan Pittaway has spent a decade painstakingly rebuilding his car, and we’re delighted to announce it will make its first run in 100 years up the hillclimb at the Festival of Speed.

“The terrific noise prompted pedestrians to turn and look as the car passed, only to have their hats blown off and hair singed by three yards of flame from the stub exhausts in the side of the bonnet.” – from ‘The Autocar’, 8 July 1911

Just two S76s were produced by the Italian manufacturer, with the aim of snatching the records for the flying kilometre and flying mile from the ‘Blitzen’ Benzes. The S76 achieved the mile record with Pietro Bordino at the wheel at Saltburn Sands in 1911 and was officially recorded at over 135mph on a kilometre attempt at Ostenede in Belguim, only to be denied the record as it was unable to complete a return run within the specified one hour.

While one car was dismantled by Fiat after the First World War, with their other racing cars, to prevent rival manufacturers obtaining their technical secrets, the other was purchased by Russian aristocrat Boris Soukhanov and eventually made its way to Australia after WW1, where it was modernised and campaigned as a ‘Fiat Racing Special’.

Duncan, who will drive the S76 at Goodwood, brought the rolling chassis remains back to the UK in 2003 and reunited it with the original 28.5 litre, four-cylinder engine from the dismantled other car. The machine has spent the past decade being restored to original specification with Roach Manufacturing of Southampton helping with the bodywork.

“After restoring a Bugatti T35, I was looking for a new challenge and the S76, which is one of the more maligned cars of its generation, fitted the bill nicely,” he tells us.

“All of the original S76 components that have survived have been restored, from the chassis and engine down to the suspension, axles, pedals, steering box, etc, with the gearbox, radiator and bodywork being created using the original Fiat drawings. As the last and largest of the huge-engined Edwardian monsters, I hope it’s going to be a sensational thing to see.”

We can hardly wait! Tickets for all the Goodwood events are available here.