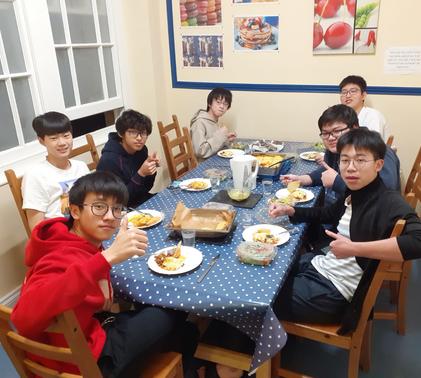 I have been immensely proud of the boarding community over the last few weeks who have really felt the enormity of the COVID-19 crisis on a global scale. We have supported the boarders with their return home and for some, this has been quite an ordeal as they have had to go through periods of quarantine and testing before being allowed to reunite with their families. The House staff have made every effort to ensure that the boarders who are still in our care, have been looked after in a way that has kept them safe and free from illness, have been supported emotionally, have kept the community together through social media and have looked after them as an extension of their own families. Having spent many years working in boarding myself, I can only imagine the pain they all went through when the houses took on a very different dynamic as each boarder left.

I would like to take this opportunity to thank all those people within our school community who offered to help care for the boarders at this challenging time. It was truly heart-warming.

I hope that you enjoy reading the news from each of the houses.

Stay safe and stay in touch!

After the announcement by the Prime Minister that all schools were to close last Thursday, the boarders went through a range of different emotions. The first one resembled that feeling that boarders get on snow day: no lessons and all fun! This was quickly replaced by a different feeling. The boarders slowly started to realise that for some, it would possibly be their last moments in the house before they were to embark on a new adventure in September. Others felt relieved that they would be reunited with their families and loved ones. One feeling was shared by everyone though: March was too soon to say goodbye to each other!

The houses started to get empty and now only seven boys remain. They have all been waiting for their flights to go home and in the meantime have had an extra week with each other. SHB went from being a busy boarding house to a much quieter home. The boys have had breakfast together in the kitchen and spent their time studying in house. In the afternoon, the garden has been the ideal place to kick a football or play badminton. In the evening, the boys have gathered in the common room and chatted. Our Head of House, Lifeng Qian, will be the last boarder to leave the house next Thursday. I cannot help but compare him to the captain of a ship who is always the last one to leave!

Whilst some of our boarders have had to be quarantined at home, in hotels or in hospitals, they are still getting in touch with us. We may not all be in the same house at the moment, but SHB and SHG boarders have definitely shown that they are still very much part of the same house! The boys have started sending photos of where they all are... it is so nice to be able to know what they are up to and now that we have been told to stay at home, the boys are enabling us to travel virtually. The girls are also keeping in touch and sending cute videos of cats at home and often ask after Lola, our boarding dog. I want to reassure everyone: Lola is fine! She is bored, misses the treats but she is OK. She will be happier when everyone comes back, though.

In the meantime, we will all remain in touch. There will be weekly challenges and funny videos posted. The Eurovision Song Contest might have been cancelled this year but I am sure that SHB and SHG will rise to the occasion and present their own take on this fantastic evening of music (School House style, of course)!

Newcombe has looked beautiful this week with the fine weather and we have been sad not to be able to share this with all our Newcombe girls as we usually would. However, we have been trying to keep ourselves occupied in these unusual times!

Our two remaining girls have had to put up with Mrs Resuggan’s attempts to put together tea; thank goodness the kitchens have been dropping food at our door in the afternoon and all we need to do is heat it up! Despite the circumstances, we have been treated to delicious meals, like lasagne and garlic bread, chocolate brownies and loads of fruit and veg.

Katie Chung (Upper Fourth) has had this to say about her experience:

“We are really missing everyone and looking forward to getting home safely to see parents, even though we know we will face quarantine. Newcombe is so quiet so it has been funny to be able to have the kitchen to ourselves and sleep in my room alone. We are happy to be safe, but wish things were normal again.”

The staff and girls are chatting in our WhatsApp group every day and we have seen pictures from all over the world showing the views from windows, most of whom are in lockdown. Speaking together like this keeps all our spirits up and our Sidcot / Newcombe community feeling supported. It has been sad to see the girls leave so suddenly, but very heart-warming to know how connected we still are and how much love and kindness everyone has shown for each other.

Wing has been a much quieter house this week but in some ways an even closer house. From roll calls in the common room with 35 boys last week, we have moved to sit-downs in the kitchen with just four this week. The boys have taken it all in their stride and are fully engaged with the Online Supported Learning programme that has been put in place. I choose to believe this is entirely out of concern for their ongoing education, but I know they also enjoy interacting with their fellow students, both in the UK and around the world.

From Monday morning, we made to decision to completely lock down all boarding houses. Our remaining students all want to get home before the Easter holidays and this would be impossible if they got ill. This has obviously restricted us all, but the boys have dealt with it in good humour. This is helped considerably by the fact that we are getting three meals a day delivered to us by the kitchens at school. They are doing a fantastic job at a difficult time and even I can’t ruin food that comes with detailed instructions for its heating up!

This has been something that none of us Housemasters/mistresses expected to happen. Certainly not the way we wanted to end the term, and quite possibly the year, but it has brought home how much a boarding house is a home away from home for the boys and girls who live in them. We all worry when our students make the journey back home, reminding them time and again to let us know they have made it back safely, and heave a big sigh of relief when they do. In the last week we have had young people stuck in airports for well over a day waiting to be taken to quarantine in hotels, others who have been tested for (and found negative for) Coronavirus and one student who was the only person in his plane from Bristol to Geneva.

Within a week everyone should be back home and we will be left contemplating the fact that they will not be physically returning on 27 April for the start of Summer Term. Despite this, the Wing boys will still be Wing boys throughout the Summer Term and as a Housemaster, I will be in touch with all them to reassure, support and give the occasional boot to get them to work!