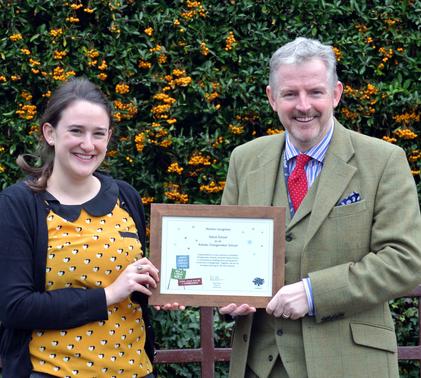 I was privileged to join Miriam Gosling and our students Harriet and Ilya in attending the Ashoka Awards Ceremony at the RSA in London. As you may be aware, Sidcot has become an Ashoka Changemaker School, one of only fifteen in the UK, and we were officially welcomed into the Ashoka network this event.

Ashoka is a network that consists of schools and elected Fellows who are addressing the world’s most pressing problems by convening and supporting groups of Changemakers. They identify and accelerate social innovation, whether through social entrepreneurship, education or business and work across sectors to build a world where everyone is equipped and empowered to create their own change. They hold an ambitious vision which, bit by bit, is being realised and provides opportunities to our students that are almost limitless.

The selection process was rigorous and we were recognised as a result of the work we have done through our Centre for Peace and Global Studies. For Sidcot, our journey with Ashoka is just beginning and I am excited about where it will lead in the months and years that lie ahead. What is certain, however, is that the need for young people prepared to look critically at the world around them and engage in the process of change could not be more pressing. Those who we met – Fellows and representatives for other Changemaker schools – were as inspiring as they were diverse. However, they shared a hope for the future that was being shaped into a reality through incremental change. It is a movement that we will undoubtedly be able to benefit from as well as contribute to in equal measure.