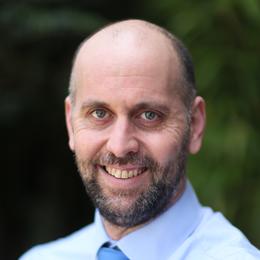 Wing House is a fine Edwardian house designed by Joseph Rowntree. It is located in the main Sidcot Gardens and was formerly the Headmaster’s Residence. It has 36 beds for boys aged 14 to 19.

James joined Sidcot in 2005 as Head of the Year 11 Pathway and has since also become Head of EAL. He teaches English as an Additional Language to international students and also teaches A Level and IB Economics. His two children both attend the School.

“I moved to Sidcot in 2005 having taught for four years in Ukraine and two years in Tokyo and came here as much for the international mix of the School as anything else. I have worked in all of the boys boarding houses and became Housemaster of Wing in September 2016."

"Working in boarding is one of the most rewarding aspects of life at a school such as Sidcot and something I have always enjoyed. Getting to know students outside the classroom is extremely rewarding and also helps massively with my teaching. Being involved in a house which has students from Year 9 all the way up to Year 13 gives the unique opportunity of allowing me to see the boys grow into young adults with all the ups and downs that this entails and it is my hope that all the boys who pass through Wing during my time here will come out of it having grown and learnt a lot about themselves and have a better idea of the kind of adults they want to be."

"There are inevitably challenges involved with living with 36 boys and a key part of the experience for students is learning to live with others and appreciate the differences between cultures and outlooks. Wing is a very open house and the boys are encouraged to build relationships with other students and with all the staff who work here."

"I am lucky to have a very strong team of Deputies and House Tutors as well as a Matron who are always there for the boys during their time with us and it is a source of pride to us all that so many boys hold Wing in such great affection both during and after their time at Sidcot."