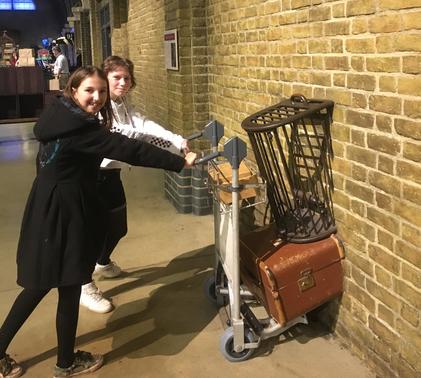 On Monday 17 June our Third Form students embarked on a special journey to Watford for a tour of the Warner Bros Studio to see how Harry Potter was made. Here are some student reviews from the day.

At 7.30am, on a bright sunny morning a bus full of eager Year 7 students departed from Sidcot School, to make the long journey to Harry Potter studios in Levesden. This trip had been eagerly anticipated all year and finally the day had arrived!

As the coach rolled up at the Studios there was a buzz of excitement that filled the air. One by one the children hopped off the bus and joined the queue which seemed to go on for ever. Finally, we got to the front of the queue.

When the doors to the Great Hall opened we gasped at the incredible detail, which brought all the books to life. Round every corner there was something to see and admire. My top four favourite exhibits were the model of Hogwarts (that the studios used for aerial shots of the castle that they used in the films). Platform 9 ¾ was magnificent as on the platform there were green screens with carriages for a cinematic experience.

The Potions Room had professors Snape and Slughron’s costumes and ladles were spinning round in the cauldrons with green and red lights in them. After lunch we entered Gringotts Bank. Inside the walls were lined with marble and as we all turned the corner a dragon approached us, burning the glass chandeliers to dust.

All too soon it was time to board the bus for home after a truly fantastic day which will live long in my memory.

We went to Hogwarts, the place of mystery and magic. Where wizards are, we saw star places of the films, such as the great hall.

We saw the train to Hogwarts known as the Hogwarts express, Dumbledore’s office, Gringotts bank and much more, but also you could be on a film set. They had cameras set up to film us on broomsticks or riding the Hogwarts Express. The model room was one of the best parts because of what’s in there – there’s a huge scale model of Hogwarts - it looks so realistic!

In the café they sold butter beer which Harry and the gang enjoyed in The Three Broomsticks. My favourite part by far was Gringott’s Bank; this is where they store the money for the wizarding world. Unfortunately it is destroyed by a dragon. We got to see the bank before and after the destruction! We even had a close encounter with the creature! It’s probably no surprise to you that this was my favourite part – it was an amazing spectacle.

Overall, it was a magical experience. I’ve been twice now and they keep adding new things to see; it’s unbelievable to think how many exhibits there are to see. It was a great trip and I would love to visit again.

We left Sidcot School of witchcraft and wizardry and entered Hogwarts after our long journey on broomsticks. We landed safely and were transferred into the magical studios of Harry Potter. As we walked in, there were pictures of owls dropping letters to all the witches and wizards on the walls and animations of Harry Potter and the eventful activities he had done in his life.

We were then taken into a small cinema room with extremely comfy seats where we then watched a video on how exciting it was to be an actor in the world winning film of Harry Potter. We got taken into a whole new world in the Great Hall, it was fantastic. We learnt about Hagrid’s costume and how it was made, which I found actually quite surprizing. We also saw the wand maker and the Dursly’s house, and even Gringotts bank which were all thrilling experiences! There were so many amazing effects that they use in the making of the film, it was brilliant seeing how they did it in real life!

My favourite parts were the forbidden forest, where we saw the spiders and Buckbeak. It was extremely spooky and I think I heard everyone in the room scream at least once! I also enjoyed the Gringotts bank because we saw all the massive shiny chandeliers and the little funny goblins as well as Dobby.

Overall this trip was absolutely amazing and I would love to go again!

The students of Sidcot School of witchcraft and wizardry embarked on an enchanted trip to Harry Potter world in Watford. The journey took three hours by coach although we could have saved much more time if we travelled by broomstick when we got there we had to be checked for sharp objects or any wands. As we went through we were welcomed in to the world of Harry Potter.

When we went through we all ducked as we saw a dragon but we were swiftly told it was just a model. We were shown the journey of the best wizard of all time, Harry Potter. There were real props and costumes from the movies. There were even real sets were the harry potter film was filmed although we were annoyed when we found out dobby was computer generated. The ominous world of Harry Potter was truly fascinating.

A few of my favourite bits included the great hall, the model of Hogwarts and the Gringotts bank. The great hall is one of the only sets that are still standing. It had the costumes and props from the real movies. It was all real except from the roof that wasn’t actually enchanted. The model of Hogwarts was huge but not as big as the real thing. The Gringotts bank was amazing there were marble pillars, gold, diamonds and real looking goblins. Unfortunately in the next room it was destroyed by a dragon. At least we got to see it before it was destroyed. Although the best thing of all was just at the end, the gift shop. Then we found out everything was overpriced and didn’t buy anything.

Overall it was a great trip and I would defiantly go again, if the drive there is shorter. Everything there was mind-blowing and even finding out how they filmed the movies. But I would not going if you want to see the movies in the same way.

The day finally came on Monday the 17th of June year 7 got on a magical flying Bakers Dolphin bus and began are journey to the world of wizardry and were it all began.  Also we can’t forget about our wizards Mr Pemberton, Mr Resuggan and Mr Church.

The bus journey was 3 hours but it was totally worth it for the magic we got out of it, on the bus we did a harry potter quiz. Before we could blink we were at Hogwarts, the flying bakers dolphin bus had landed. We were all very eager to get off the bus and explore the magical making of harry potter.

When we arrived in the lobby there was the dragon that destroyed Gringotts  bank as we continued to walk on we were told a bunch of facts. My favourite part was getting to see dobby the one that they used in the movie, another one of the best parts was when we all walked into the bank and an animated dragon breathed fire on us and even smoke came out! it was so realistic! But the best one was at the end were we saw a model of Hogwarts it was massive and so magical. Then it was time to get on the flying bakers dolphin bus for another long trip back.

Unfortunately the trip came to an end for the year 7s. We all had an amazing time and hope to come back soon.

The day had finally come. It was the 17th of June and we were on our way to Harry Potter World! After a tiring three and a half hours we arrived in Levesden. The trip there on the coach was also entertaining as we did a Harry Potter Quiz!  Everyone was excited (even the teachers) as we walked through the doors, leading us into a world of magic and mystery.

As we entered the tour, every room was packed with props and facts. The third room led us into a cinema which showed us an image from each film. When the movie had ended it revealed a realistic stone wall with a massive door, which opened into the Great Hall! The candles were lit, the uniforms were on stands and the stone statues glared down on us, as we walked past.

One of my favourite parts was the fire breathing dragon attack, where the dragon destroyed the Gringotts Bank. My second best part was where the whomping willow was damaging Mr Weasley’s car. My last but not least part was the Forbidden Forest. In the Forbidden Forest, the spiders were in caves and after a few seconds the spiders crawled out. Their eyes glared and beamed at us and they made hissing and spitting noises.

It was really intriguing to see all the props and sets, and how they were made. There was even a part where it showed you a tutorial of how the Goblins were made by using latex and silicone. Did you know that Hagrid was played by two different people?!

Overall, this was an awesome trip and I really enjoyed it. I would love to go again and I would definitely recommend it to Harry Potter Nerds! The experience was amazing and captivating.

Year 7 learned magic and mystique. They took the Bakers Dolphin Express and delved into Harry Potter World. As they drew nearer the excitement increased ten-fold, so by the time they got there the Express was buzzing with almost tangible energy.

Inside the lobby was the dragon, a colossal scaly beast, the size, down to an inch, of an aeroplane. It was suspended, as though someone had frozen a moment out of the dragon’s life. The children were given a short tour, then released into a new reality of magic.

In my opinion, some of the best parts were the: great hall; the place where Harry and his school mates dined; the holographic dragon – a projection on smoke but very realistic; seeing the giant spiders (otherwise known as acromantula) in the forbidden forest, and Dumbledor’s office – I particularly liked ‘The Pensive’, a device that stores memories.

All in all, Harry potter world was a brilliant experience.