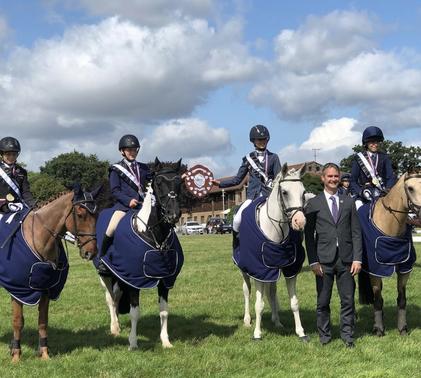 The competitions continued through the summer holidays with team riders returning to Stoneleigh to compete in the British Show Jumping Just for Schools league championships.

Throughout the year riders have been travelling around competition venues in the South West region to collect points both as team riders and individuals. This ensured they secured a place in the top 10 by the end of the league season, qualifying them for the National British Show jumping Championships in August. Sidcot Equestrian exceeded all expectations by finishing top of the league! With team places secured in the 70cm, 80cm and 90cm classes.

This positioning also meant they had qualified to attend a training camp at the Unicorn Centre, Stow on the Wold, just before the championships to make sure they were well prepared for what was to come.

Congratulations to Henry Blair, Hugo Blair, Harriet Blair, Archie Stamp, Holly Cooke, Sophie Lee and Caoimhe Collery. All your hard work over the last year was well rewarded with this training camp, covering all aspects of training for both the equine and human athlete.

After an incredibly early morning to begin the journey to Stoneleigh, the riders set their attention to retaining the 70cm National Championship title won by the school last year. This time it was the turn of Holly Cooke, Harriet Blair, Hugo Blair and Archie Stamp to ‘ride adventurously’ and make it into the jump off, when the fast turns and quick times would be needed to secure the title.

The pressure was on as the lightest of touches meant a few poles fell to the ground, but into the jump off they went. It was incredibly close between all of the teams, with the decider for the placings being on the last riders in each team. Hugo took this place for Sidcot and handled the pressure fantastically as he flew around on board Occy to give Sidcot a clear, fast time to secure them the WIN! It was a fabulous team effort and was so lovely to bring the trophy back to Sidcot for another year.

There was a quick turnaround as the 80cm team were up next. This time it was Harriet Blair, Hugo Blair, Henry Blair and Archie Stamp. Henry had also managed to secure an individual qualification for this height also. With fabulous riding from all team members, they were through to the jump off and ready to compete for another top placing. Again it was a very close but all of the riders held their nerve and secured a fantastic 2nd place, with Henry also finishing 8th individually!

Last but not least at the end of a busy day was the 90cm team, consisting of Henry Blair, Sophie Lee, Archie Stamp and Caoimhe Collery. The atmosphere was building but this didn’t distract our riders from the job in hand. Just a few touches of the poles, but stylish and fast rounds meant they secured a brilliant 4th place.

A huge well done to all riders. It was a fabulous day for all of Team Sidcot. Not only had they managed to achieve qualifications in all three heights, they were able to be competitive as such a prestigious show and come home with a top 4 placing in each class!